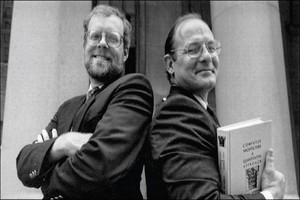 ACM named John L. Hennessy, former President of Stanford University, and David A. Patterson, retired Professor of the University of California, Berkeley, recipients of the 2017 ACM A.M. Turing Award for pioneering a systematic, quantitative approach to the design and evaluation of computer architectures with enduring impact on the microprocessor industry. Hennessy and Patterson created a systematic and quantitative approach to designing faster, lower power, and reduced instruction set computer (RISC) microprocessors. Their approach led to lasting and repeatable principles that generations of architects have used for many projects in academia and industry. Today, 99% of the more than 16 billion micro-processors produced annually are RISC processors, and are found in nearly all smartphones, tablets, and the billions of embedded devices that comprise the Internet of Things (IoT).
Hennessy and Patterson codified their insights in a very influential book, Computer Architecture: A Quantitative Approach, now in its sixth edition, reaching generations of engineers and scientists who have adopted and further developed their ideas. Their work underpins our ability to model and analyze the architectures of new processors, greatly accelerating advances in microprocessor design.
The ACM Turing Award, often referred to as the “Nobel Prize of Computing,” carries a $1 million prize, with financial support provided by Google, Inc. It is named for Alan M. Turing, the British mathematician who articulated the mathematical foundation and limits of computing.
“ACM initiated the Turing Award in 1966 to recognize contributions of lasting and major technical importance to the computing field,” said ACM President Vicki L. Hanson. “The work of Hennessy and Patterson certainly exemplifies this standard. Their contributions to energy-efficient RISC-based processors have helped make possible the mobile and IoT revolutions. At the same time, their seminal textbook has advanced the pace of innovation across the industry over the past 25 years by influencing generations of engineers and computer designers.”
Attesting to the impact of Hennessy and Patterson’s work is the assessment of Bill Gates, principal founder of Microsoft Corporation, that their contributions “have proven to be fundamental to the very foundation upon which an entire industry flourished.”

Development of MIPS and SPARC
While the idea of reduced complexity architecture had been explored since the 1960s—most notably in the IBM 801 project—the work that Hennessy and Patterson led, at Stanford and Berkeley respectively, is credited with firmly establishing the feasibility of the RISC approach, popularizing its concepts, and introducing it to academia and industry. The RISC approach differed from the prevailing complex instruction set computer (CISC) computers of the time in that it required a small set of simple and general instructions (functions a computer must perform), requiring fewer transistors than complex instruction sets and reducing the amount of work a computer must perform.
Patterson’s Berkeley team, which coined the term RISC, built and demonstrated their RISC-1 processor in 1982. With 44,000 transistors, the RISC-1 prototype outperformed a conventional CISC design that used 100,000 transistors. Hennessy co-founded MIPS Computer Systems Inc. in 1984 to commercialize the Stanford team’s work. Later, the Berkeley team’s work was commercialized by Sun Microsystems in its SPARC microarchitecture.
Despite initial skepticism of RISC by many computer architects, the success of the MIPS and SPARC entrepreneurial efforts, the lower production costs of RISC designs, as well as more research advances, led to wider acceptance of RISC. By the mid-1990s, RISC microprocessors were dominant throughout the field.

Groundbreaking Textbook
Hennessy and Patterson presented new scientifically-based methodologies in their 1990 textbook Computer Architecture: a Quantitative Approach. The book has influenced generations of engineers and, through its dissemination of key ideas to the computer architecture community, is credited with significantly increasing the pace of advances in microprocessor design. In Computer Architecture, Hennessy and Patterson encouraged architects to carefully optimize their systems to allow for the differing costs of memory and computation. Their work also enabled a shift from seeking raw performance to designing architectures that take into account issues such as energy usage, heat dissipation, and off-chip communication. The book was groundbreaking in that it was the first text of its kind to provide an analytical and scientific framework, as well as methodologies and evaluation tools for engineers and designers to evaluate the net value of microprocessor design.

John L. Hennessy
John L. Hennessy was President of Stanford University from 2000 to 2016. He is Director of the Knight-Hennessy Scholars Program at Stanford, a member of the Board of Cisco Systems and the Gordon and Betty Moore Foundation and Chairman of the Board of Alphabet Inc. Hennessy earned his Bachelor’s degree in electrical engineering from Villanova University and his Master’s and doctoral degrees in computer science from the State University of New York at Stony Brook.
Hennessy’s numerous honors include the IEEE Medal of Honor, the ACM-IEEE CS Eckert-Mauchly Award (with Patterson), the IEEE John von Neumann Medal (with Patterson), the Seymour Cray Computer Engineering Award, and the Founders Award from the American Academy of Arts and Sciences. Hennessy is a Fellow of ACM and IEEE, and is a member of the National Academy of Engineering, the National Academy of Sciences and the American Philosophical Society.

David A. Patterson
David A. Patterson is a Distinguished Engineer at Google and serves as Vice Chair of the Board of the RISC-V Foundation, which offers an open free instruction set architecture with the aim to enable a new era of processor innovation through open standard collaboration. Patterson was Professor of Computer Science at UC, Berkeley from 1976 to 2016. He received his Bachelor’s, Master’s and doctoral degrees in computer science from the University of California, Los Angeles.
Patterson’s numerous honors include the IEEE John von Neumann Medal (with Hennessy), the ACM-IEEE CS Eckert-Mauchly Award (with Hennessy), the Richard A. Tapia Award for Scientific Scholarship, Civic Science, and Diversifying Computing, and the ACM Karl V. Karlstrom Outstanding Educator Award. Patterson served as ACM President from 2004 to 2006. He is a Fellow of ACM, AAAS and IEEE, and was elected to the National Academy of Engineering and the National Academy of Sciences.

ACM will present the 2017 ACM A.M. Turing Award at its annual Awards Banquet on June 23, 2018 in San Francisco, California.